For many of us there is so much guilt and shame that comes with having an abortion. We try to bury those feelings and keep ourselves “filled” and busy in an effort not to face the pain. If there is one thing, I have learned over these years it is how necessary it is to stop the filling and begin the *emptying* so that the *miracle of healing* can occur.

About 11 years ago, I decided to make time in my day to sit and pray in front of the Blessed Sacrament. This was extremely foreign to me being that I didn’t have a very strong faith to begin with. At this time, I had been to a few “Entering Canaan” retreats and had even begun volunteering at a soup kitchen, joined a bible study and lead a rosary at a nursing home. And even though serving God in this way helped, interiorly I still suffered. 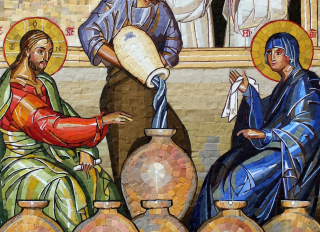 Initially, I would just sit for a few minutes and say a quick prayer. However, as time went by, I stopped reciting prayers and learned how to be still and allow myself to feel what was stirring up inside of me. I began to remember all the things I had been trying to forget and run from. There were many days that I couldn’t stop crying as He emptied me of all the shame and guilt I had been carrying. And then one day I realized that there were no more tears left as I had finally given it all up to Him while I was with Him. I never believed I could come to such a place where I was able to finally accept His mercy and forgiveness. What He had done for me and in me was a miracle.

Not too long ago, while sitting in prayer I thought about the first miracle Jesus performed during the wedding feast at Canaan. And then I thought how ironic…It wasn’t until the bottles of wine were* empty *that the* miracle *occurred.
Coincidence? I think not.