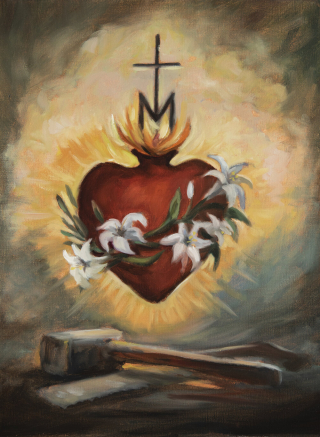 Today is the feast of St. Joseph, someone who lived in Palestine around the 1st century from our era, a Jewish man, righteous in the eyes of God, betrothed to a woman who we know gave birth to a child. The stories about him come to us from the tradition of the Gospels, which make up an important part of the collection of books we know as the Bible.  But, who was Joseph?, and how is his life, so long ago, and of which we know so little from the Gospels account, of use and service to us and our healing today.

Well, the answer is faith.

One might ask then, what is faith? According to the Catechism, faith is an adherence to God. An adherence, which in itself means an attachment or a commitment to a person, cause or belief. This word is also defined as the quality of sticking fast to an object. So, again, how does this man’s life, or what’s more, his faith, affect or influence us today? Who did St. Joseph stick fast to? Who did he attach himself to, and commit his life to, while living in Nazareth? The answer to these questions is a Person, and that Person the source of yours and my salvation and of our healing.

St. Joseph’s life on earth saw him witness, on a daily basis and in as close a proximity as anyone else besides his beloved wife, the tender and powerful love growing in front of him, the child, the boy, and the man Jesus. His life as a working man, a protective husband, and a loving father, was his vocation, or in other words, how The Almighty of Israel called him personally to serve Him in the world. Nothing less than protecting God’s Only Begotten Son, Jesus, the one who came to fulfil the Messianic hope of Israel, protect him by providing a safe and loving home, one where the faith of his people would be taught, and where the values of a loving and tight-knit family would be lived. And so he did! That’s one reason why God called him, because he would protect the Holy Family, listening faithfully to God’s callings to escape to Egypt, and become a guardian of his wife, the Virgin Mary, and her child.

So, again, how can we, today, almost 2000 years later, connect with with this same Joseph who lived with Jesus in Nazareth, who witnessed his holy birth in Bethlehem, who protected him from the evils that threatened the child’s life, and who committed his life to this adopted son The answer continues to be in the realm of faith. Now a saint in Heaven listening to yours and my prayers, St. Joseph hugged, talked to, fed, and saw everyday in front of him that same Jesus “growing in wisdom and in years and in divine and human favour” (LK 2:52). He saw grow that same God who we now know, thanks to Revelation, is a Triune God, Father, Son and Holy Spirit. St. Joseph’s faith led him to accept the mission to protect a God who became a vulnerable child, and Incarnated God. St. Joseph, through his sense faith and of fatherhood, became the guardian of that family that became the Holy Family, a family where you and me can now rest, trustingly. St. Joseph, guided by God and his Angels, guarded his beloved wife, Mary ever Virgin, and his adopted son, so that you and me can have peace in our hearts. St. Joseph is thus the protector of the Church, the Body where you and I find salvation.

This reality of regular men acting in the plan of God’s salvation applies to everyone, to you and me. Definitely not at the level of this powerful spiritual guardian, but nonetheless powerfully, because you and I have been called to repentance, to mercy, and to salvation. As post-abortive men we are being called also to a special kind of healing, a healing that finds in St. Joseph a most powerful protector, a father of fathers, who knows we are broken men and thus intercedes for us with his adopted son and Lord, Jesus, so that we are restored, so that we know and trust in Him who he himself listened to.

St. Joseph was called by God, and he answered. I know we are being called by God, called to let Him in our hearts, so that we learn how to trust Him better, as Joseph did.  Called to have faith, to be adhered to Jesus. We need to remember St. Joseph was a regular man, an Israelite, a working man, vulnerable like all men, yet who said yes to God. Through his yes, Jesus, who many years later would reveal himself to the Apostles as the Messiah, die on a cross a gruesome death for yours and my sins, and be resurrected from the dead winning eternal life for you, me, and everyone who believes in Him, was protected from death by Herod’s murderous campaign. As regular men, you and I are also being called to say yes, a big Yes to Jesus, Jesus on the Cross. On the cross His Mercy became available for eternity and for everyone. It washes away yours and my sins. His blood is here now, even more powerfully through St. Joseph’s intercession, to cleanse us from our sins of abortion. Jesus’ Mercy, Infinite and Divine, real and concrete, becomes a reality in our lives as we adhere ourselves to our Lord, as we commit ourselves to Him, attach ourselves to His Providence, as we stick closer and closer to Him, as we grow in faith, as our protector and father did, St. Joseph.

We are vulnerable men, our past has shown us that quite clearly, and we will continue being vulnerable, sinners, but it is through our weakness that our salvation is worked, and what’s more, it is through our sin that many of us had to reach out to Him. God somehow has decided to work through our frailty, our weakness, and He has done this throughout history, it is what is called by learned theologians part of the economy of Salvation, the way God does things here on earth, where so much sin happens, yet where His grace works in us , ‘ My grace is sufficient for you, for power is made perfect in weakness’” (2 Cor 12:7-9).

Our calling is one of healing. We need to take this as seriously as St. Joseph took his calling. We need to know that, as he was vulnerable, frail, and surely many a time scared, so we too will be and feel all of these. We will then have to make decisions, and those will take us to forks in the road, forks where we either have faith in the God revealed in Christ, the One who is Mercy, or we allow the evil one, the accuser, to condemn our frailty. We will either accept tender love, be open to encounter God’s mercy, be humble enough to say Yes to Jesus Lord, or allow the one who only condemns to do his work of spreading despair. We already know despair, so we should be able to recognize it better. And one thing is sure,  in God there is no despair, but only Hope, Hope in Eternal life. God welcomes us, embraces us, and most importantly, forgives us. We must have faith in this, which is the same as having faith in Him.

As St. Joseph walked this earth with faith, may we also walk the rest of our days, which are short, in faith. Faith in God. The All Powerful God, who knows us better than we know ourselves, who understands us and our weaknesses better than we can ever understand them, and who has reconciled the world to Himself, forever, in the person of Jesus Christ, your Lord and mine.

We just need to trust in this.

May St. Joseph prayers intercede for us, and may they bring Jesus’ Peace to our souls, our homes, and the entire Church. -IP

*Painting of Heart of St Joseph by Michael Corsini  www.michaelcorsini.com