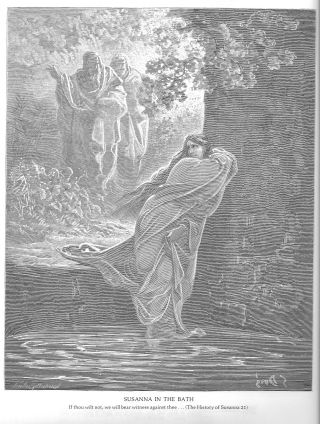 In both the first reading from the book of Daniel, concerning the beautiful and faith-filled Susanna and in the Gospel reading from John in which the Scribes and Pharisees bring the woman caught in adultery to Jesus for His judgement, I am struck by the harsh punishments of those times pronounced upon anyone found guilty of violating the Laws of Moses.  Considering my sins, especially the sin of abortion, I am eternally grateful for the “unfathomable mercy” of our Lord Jesus Christ, and for my salvation through His life, death and resurrection.

When I think back, to those 40 years ago, I remember the dread and fear I felt while imagining the judgements of all those around me should they find out I was pregnant. What would have been said about me if I had decided to raise a child on my own. I was not a God-fearing woman like Susanna.  I was concerned only with what people would think of me.  The imagined words of my friends, family and co-workers resounded in my head… ‘I was only starting out’… ‘I had my whole life ahead of me.’   My hope was to have married the man I was engaged to – but he wanted no part in raising a child at that point in our relationship.

I think of Susanna and her upbringing by her pious parents. I too was brought up by faith-filled parents, who taught me to have faith in God. Yet, I did not have the strong faith and the courage of Susanna.  She was faced with death for a transgression that she did not commit. I did not have a strong enough faith, nor the humility to allow God to guide me in making the right decision. At that point in my life, I was slipping away from God – conveniently forgetting all that I had been taught so that I could live a carefree life.  Without a strong faith and a God-centered life, I caved very easily to pressure and made the awful decision to abort my child.

So many of us who have made that decision thought we could just move on and things would return to normal; that our lives would get back on track. Once I faced the memory of what I had done, I could only imagine the punishment I deserved. I was sure that I would be condemned forever. I went back and forth trying to resolve the pain in my heart and the conflict in my mind. For a time, I denied the truth of the Catholic faith. I tried to believe that what I was taught may not be completely true…maybe Heaven or Hell didn’t exist. Maybe sin didn’t really matter; and for many years, I went on to live an empty life, denying the gravity of what I had done. But one can deny the conscience completely for a while, but somewhere on the journey through life, the memory emerges.  If we are blessed by the Grace of God to seek help and call upon the faith we were taught, He will guide us to the path of forgiveness and healing.

Through his complete love for us, we have been given the Diary of Saint Maria Faustina Kowalska.   Through His revelations to her, Jesus tells Sr. Faustina: “Apostle of My mercy, proclaim to the whole world My Unfathomable Mercy” Diary 1142.  His message to Sr. Faustina throughout the book is that He wants the salvation of souls more than anything else.  He gives her the Chaplet and Image of Divine Mercy, so that we can pray for the conversion and salvation of one another. But he lets us know that we must have faith in Him, and we must ask for his forgiveness. He tells Sr. Faustina…” But for Me to be able to act upon a soul, the soul must have faith. O how pleasing to Me is living faith!” Diary 1420.  By praying for others, for souls who are lost, we can play a role in bringing about the conversion of the worst sinners.

As for ourselves, we often think ”this sin is too awful to be forgiven.”  But throughout the Diary, we are told that no sin is too great for His Mercy. One of the choices for the Gospel acclamation for today states:  “ I take no pleasure in the death of the wicked man, says the Lord, but rather in his conversion, that he may live.” (Ez 33:11)  From today’s Gospel (John *1-11),  I imagine standing before a crowd like the woman caught in adultery and feeling the shame. But then, I also imagine looking into the eyes of Jesus and feeling His love and forgiveness fill my soul.  I am grateful that by His Grace, I have been forgiven.

I invite you today, to get a copy of Saint Faustina’s Diary.  Read the words of Jesus and feel the sincerity of His message. Our Lord wants you to know of His Mercy and His Love for every soul. His forgiveness is present to all of us for the asking ~ we must only ask from the heart. – Marybeth